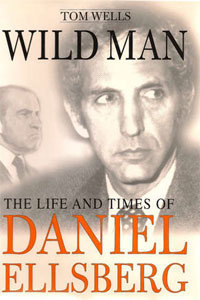 The Life and Times of Daniel Ellsberg

"One wouldn't think the life of a man whose fame rests on a single dissident act could sustain a 700-page biography. But Tom Wells's Wild Man succeeds terrifically. A first-rate historian of the antiwar movement, Wells understands Vietnam's hold on America... Like such interpreters of the conflict as Maya Lin, Tim O'Brien and Stanley Kubrick, Wells sides politically with the antiwar cause but seldom lets his sympathies harden into simplicities. Rather, in this extensively researched and engagingly written account, Ellsberg comes across as—all at once—a brilliant military analyst, a devoted (often fanatical) convert to the peace effort, a victim of Nixon's skullduggery, and an obnoxious and sometimes dishonest egomaniac. Wells realizes that for all the scorn that's been heaped on psychohistory, a biographical subject's psyche must still be probed. He probes Ellsberg's mind circumspectly, without overreaching and with fruitful results... Even more successful than his account of Ellsberg's life is the way Wells uses his subject's career to explore the murky moral universe of Vietnam War politics. He rarely presents Ellsberg's actions as plain rational decisions with easily discerned ethical implications. Instead, he discovers mixed motives and grayness everywhere... Wells is a fair and perceptive chronicler of the life of this sometimes inspirational, sometimes maddening, always fascinating figure. More important, he is an exceptional historian of the inspirational, maddening and fascinating political drama of which Daniel Ellsberg was a small but significant part."

"[A] meticulously researched biography…. It's a tremendous story, and Tom Wells, author of The War Within: America's Battle over Vietnam, largely succeeds with his task…. Sad story, but also a fascinating one about a deeply idealistic, deeply flawed man."

"An exhaustively researched book…. The most interesting and detailed account to date of how Ellsberg tried to peddle the [Pentagon] papers…. [A] lively exposé…. The author does a first-rate job explaining the importance of his leaking of the Pentagon Papers for American politics during the Nixon administration and beyond."

"Tom Wells has done the nearly impossible in his comprehensive biography of Dan Ellsberg—captured the enigmatic and erratic brilliance of a gung ho war-lover who sought the opportunity to 'kill Communists' in Vietnam, then risked prison to give the Pentagon Papers to the press in the single most effective blow of the antiwar effort he once had scorned."

"A fascinating tale…. A riveting account of the White House-initiated break-in of the office of Lewis Fielding, a psychiatrist who had treated Ellsberg…. Tense, gripping."

"Richly detailed…. It was to plug the Ellsberg leaks that the Nixon administration organized the 'plumbers,' whose first victim was Ellsberg and whose aggregate criminality, when exposed during the Watergate break-in, Wells says, led to the collapse of 'Nixon's authority in Congress and thus his ability to continue waging the war.' This is an audacious argument, but after reading Wells's book many will find it persuasive."

"By releasing the Pentagon Papers to the New York Times, the enigmatic Daniel Ellsberg forever etched his name in the annals of American history. But until Tom Wells wrote Wild Man, the strange and twisted life of Ellsberg was largely unknown. Now, in this brilliantly researched biography, we finally understand the demons that drove the eccentric Ellsberg to perform a daring act of patriotism aimed at extracting the United States from the Vietnam War."

"Fascinating…. A classic tale of a man whose life and reputation were totally redefined by a single act."

"This Ellsberg biography should have appeal. Wells—author of The War Within (1994), a well-received study of the intense debate Americans conducted over Vietnam—interviewed more than 200 sources and draws on archival collections plus Freedom of Information Act requests…. There's plenty of fascinating material here about Ellsberg's family, education, service as a marine, and work for the Pentagon and the Rand Corporation…. Wild Man offers useful insights on a significant historical era."

"Tom Wells has written a fascinating biography about the bizarre career of Daniel Ellsberg before he became famous as the man who turned the Pentagon Papers over to the New York Times. He has also retold, in breathtaking prose, portions of the dastardly and inept deeds of the 'Plumbers' unit within the White House for a generation of Americans who have long since forgotten (if they ever knew of) Ellsberg and the Pentagon Papers. Ellsberg may not be happy with this revealing account of his life and career, but Wells's biography will save him from becoming a mere footnote to history."

"The definitive book on Dr. Ellsberg. It represents a huge amount of work …. Massively well-researched…. A fascinating book…. Extremely well done…. I recommend it."

"The best description I have ever read of the strange and bungled break-in at Dan Ellsberg's psychiatrist's office."

The War Within: America’s Battle over Vietnam

"An invaluable record of an unforgettable American calamity"

The Wrong Guys: Murder, False Confessions, and the Norfolk Four

"Over the past few years, I have read many stories about wrongful convictions…. The Wrong Guys might be the best one yet"

Wild Man: The Life and Times of Daniel Ellsberg