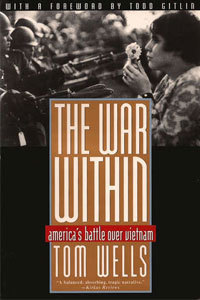 "An invaluable record of an unforgettable American calamity.... The War Within deserves to be read and pondered for the lessons it provides about the surprising power of ordinary citizens to make and break wars and Presidents."

"A vivid history of America's struggle with itself.... Wells gives the drama with a novelist's intuitions, drawing skillfully on his remarkable interviews...integrated with painstaking archival research.... Open this vast, absorbing narrative to any page and one finds vivid personal dramas."

"The definitive story of the movement and its effect on policymakers in Washington."

"Destined to become the definitive work.... This book is at times overwhelming, numbing...moving, startling and horrifying in its rich detail. Astounding revelations emerge in a book as meticulously researched as this one.... Always dramatic."

"The War Within features painstaking research and an impressive breadth of coverage.... The writing is excellent, the images are vivid, the quotations take us back to the intensity of emotion created by the war."

"This absorbing drama filled with vivid characterizations is an impressive work of scholarship."

"Enormously impressive. Certainly the best—most vivid, most passionate—account of the movement against the war I have seen."

"Tom Wells has written an important book.... Mandatory reading for all historians of the 1960s…. The research is judicious, the interviews are enlightening, and the stance is as bold as the antiwar movement itself. The War Within is a valuable contribution to recent American history."

"[A] monumental work of original scholarship.... The stunning result of Wells' labor is a book that no serious student of either the anti-war movement or the Vietnam War can ignore.... [A] profound achievement.... Wells' book changes the way we see our history."

"A penetrating, comprehensive study.... Above all, Wells shows how a grassroots political movement forever altered the course of American history.... The War Within is a valuable, clarifying study of a long-misunderstood aspect of the Vietnam War era."

"Tom Wells's book is the War and Peace of the movement to end American involvement in Vietnam. Like Tolstoy, he offers a massive cast of characters and a plethora of detail, but also a coherent theme. For Wells, it is that the uprising of young American citizens succeeded in changing our Vietnam policy beyond their own recognition."

"This is our own history at its best, with a creative new perspective on events we only thought we knew. In the 1960s America confronted itself as never before, or after, and The War Within is a compelling portrait of that fateful meeting."

--Roger Morris, author of Richard Milhous Nixon: The Rise of an American Politician

"A welcome addition to the literature, written in a readable style that captures much of the tension and fervor that characterized those years.... A considerable achievement and a solid contribution to a topic of continued importance."

"There is no better book on this subject. Excellent archival work is combined with an impressive number of interviews with participants on both sides of the barricades."

"This monumental work is the one most important book to read about the political movement in the U.S. that paralleled the Vietnam War and finally choked off the American ability to wage it.... The prowar as well as the antiwar mind will be deeply rapt by the narrative Wells has assembled.... This book is de rigueur for anyone with an interest in any aspect of the history of the Vietnam War."

"Wells brings to life the antiwar movement's struggle against the Vietnam war and the efforts of the Johnson and Nixon administrations to counter the protests.... A very valuable contribution to the study of that divisive era."

"An important addition to the field.... Comprehensive.... Highly recommended."

The War Within: America’s Battle over Vietnam

"An invaluable record of an unforgettable American calamity"

The Wrong Guys: Murder, False Confessions, and the Norfolk Four

"Over the past few years, I have read many stories about wrongful convictions…. The Wrong Guys might be the best one yet"

Wild Man: The Life and Times of Daniel Ellsberg